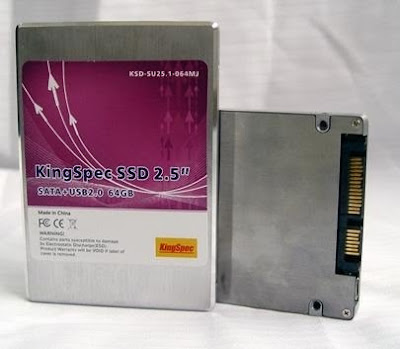 I recently bit the bullet and dived into the SSD game. My trusty IBM X40 is 5 years old, still running strong but slow as a dog. Even though I only use it for occasional travel, and to RDP to my main box while sitting on my Lazyboy ... the laptop has always been annoyingly slow.

While I wait to decide to plunge into a new desktop system with SSD (Probably the Intel X25), with Windows 7 and 64 bit etc ... I lazily poked around and discovered that recently there have been aftermarket sales of SSD drives for the X40. The X40 is a strange laptop in that it has a special and very uncommon slot for hard drives, a 1.8 inch IDE slot. Until recently you could *ONLY* get the 30GB drive from IBM and nothing else.
Well now thats changed, you can get SSD drives from KingSpec and Levano ! The 60GB Levano drives list at $1200+ (eikes) but you can get them on ebay for $200. The Kingspec comes in 32G and 64G for $150-$200. There's a lot on the net about these and which works best etc. I went with the Kingspec for its slightly better ratings. (I suggest for an X41 you go with Levano to avoid an annoying boot time beep).
I knew that I'd have problems re-installing the OS because the X40 doesnt come with installation media, instead it has a seceret partition used to re-install. You have to talk IBM into selling you a reinstall CD set for $50. I found a company on the net selling these for $20 so I bought them. I also needed an external CD drive (X40 is CD-less). I swear I had one lying around but couldnt find it ... so thanks to ebay a $30 el-cheapo USB CD drive. Plus I used TrueImage to do an image backup of my HD to an USB Drive. And at worse, I still have my original drive if all else fails I can put it back in ...
Packages all came within a week and I brought out the screw driver, watched the "how to remove your hard drive" video from Levano, worried because there were horror stories about how these SSD drives dont fit right sometimes ... but nope. 10 minutes later and 5 screws I had the SSD drive installed. (1 screw on the case, then the drive itself is in a little caddy that is screwed on, you need to move the caddy to the SSD drive). It booted up in BIOS fine , although I cant find a single place in the X40 BIOS that refers to the HD or IDE ports. Weird.
My first goal was to do a re-install from my TrueImage Backup. I read some people were successful at this (using some other backup program). Not me. TrueImage recognized the drive fine and the backup device, but about 1/2 way through setting up the From and Too parameters it went into "beep beep beep" mode. Totally hung. Retried 3 times same deal.
Ok try #2. Use the Recovery CD's from Levano. They take FOREVER. There are 7 CD's. The first one takes 20 minutes to launch the recovery panel, then you put in CD after CD about 30 minutes a piece (really!). #Fail. 2 of the CDs' reported CRC errors. I even tried duplicating on my desktop (they Dup fine, and the files read fine). But nope. Reading on the net many people have this problem and noone reports success, even after having the CD's replaced 4 times.
And worse ... it takes HOURS ... I mean like 4 hours to get to the point where it dies.
Screw that.
Ok last resort. I have an XP Pro bare-bones (non-OEM) CD.
Voila ! It installs in under 15 minutes !
Bare bones though, it barely recognized my hardware but it was enough to bootstrap.
Then update with an XP/SP3 CD (45 mintes). Then I had to start digging on Levano site for drivers as not even my hardwired ethernet driver was working. Thankfully my USB port was, and the Thumb drives worked great to download the network drivers from Levano.
Boing ! couple drivers later I had networking, from there on it was a breeze.
I picked and chose which drivers to download, and avoided the crapware (like Access IBM Connections) ... took a couple more hours but mostly idle time.
I now have a fully driver installed XP running. There are a few glitches. For some reason the Trackpoint driver took several installs before it worked, my InnoculateIT isnt getting up to date signatures (goes to 1% and says "done" leaving 2001 signature files in place). But other then that, once I got things going it works great !
Now for the fun.,
Speed.
BEFORE:
Power On to Login Prompt: 1 min 24 sec
Login to Desktop with no wait cursors: 1 minute
No wait cursor to no more disk light flashing: 5 minutes
AFTER
Power on to Login Prompt: 20 sec
Login to Desktop with no wait: 20 sec
No wait to no more disk flashing: 10 sec
It FEELS like its about 100x faster ... but even the #'s are good. I can now do a hard reboot without going for 2 cups of coffee. and it feels like its a new modern machine.
In fact it feels faster then a LOT of modern machines. even though its only a 1.6 Ghz, single processor machine. It feels born again. Now if only I can scrounge some keyboard parts for my pointer key that's wearing out.
Posted by Unknown at 7:27 AM

A few more failures but mostly good. Innocuate/IT doesnt seem to work properly. Also I was installing NOD Antivirus (trial) at the same time as doing an Windows Update then my system wouldnt boot (stuck in the windows load bar) but Boot to Safe Mode worked, and thankful for the Restore to Savepoint !

I realized I should have been more patient with Acronis. It *normally* hangs at the point of searching your disk sometimes for 10+ minutes. I suspect if I had been more patient I could have restored my image backup and saved some hassle.

However it is nice to have a cleanly installed OS. Worth it in the long run.

I know this is an old article but did you ever end up having any problems with the Kingspec drive? There are mixed reviews of it online so I was a little hesitant to get one for my X40.

No problems at all. It is still running strong.

That's good to hear. Many people have reported that the Kingspec drives suffer from a noticeable decrease in performance due to it's lack of support for the TRIM feature.

Do you have the exact model number for the drive in your X40. The one in the picture at the top of your post is a SATA model. I belive the X40 uses a PATA type.

Performance may well degrade but I doubt it will ever get as bad as the spinning drive that was in there.

Hi,
Can you please mention where you bought the OS replacement CDs? I bought this secondhand off Ebay and it didn't come with anything. Thanks so much.

I forget where I bought the CD;s but they didnt work.
I ended up using a plain Windows XP install CD. It worked fine.

FYI Last week my trusty X40 died. I applied the latest windows update and it wouldnt reboot. It came up saying "Cannot find boot disk" ... Ug. Its time for the farm I guess. Or maybe start over ? I havent put any time into resurrecting it. so maybe its not quite dead.