My friend and I just came back from a great scuba dive trip to Curaça, part of the "Netherlands Antilles" ABC islands (Aruba, Bonaire , Curaçao )

Lets get it out of the way. Its pronounced "Kur-A-Sow" (not "kur-aahh-koo").
And yes that funny ç is a "C with Cedill" 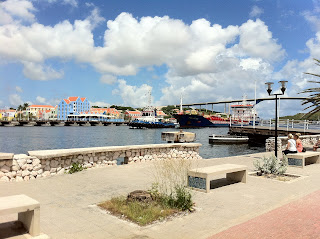 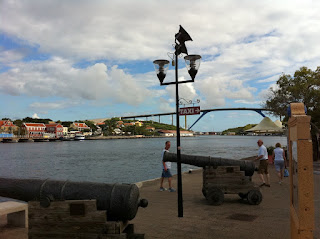 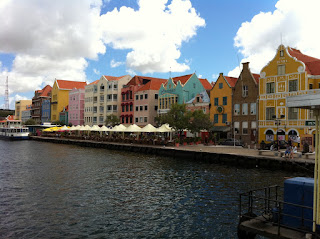 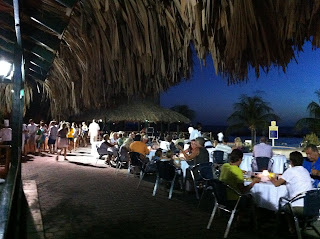 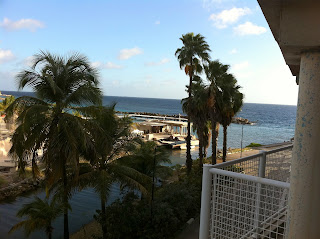 Before last year I had never heard of this country. Ignorant Americans. Now I'm convinced its the Hidden Jewel of the Caribbean. (full history)

Settled by Spain in the 1500s then captured by the Dutch and used as a cornerstone for the slave trade until 1863. Then oil was discovered and then tourism. Now it is a marvelous little island, well developed, quite clean, modern, and friendly.

We went primarily for Scuba Diving (at the suggestion of our local dive shop), and for convenience and price stayed at Breezes which hosts a full dive shop, all incusive all-you-can-eat-or-drink and a reasonable tropical paradise look & fell almost (but not quite) equaling a Disney resort. Breezes, is well, a Breezes. A great value for the money, but not particularly high end. But since we went for diving not entertaining it worked. The rooms were spacious and clean, most everything worked and nothing to complain about except the usual ( long lines at the bars, "mini" beers served in 6 oz cups, but you could get as many as you want, a TV that went into "demo mode" every 5 minutes, a pretentious "pretending to be fancy" specialty restaurant which would rather I wear dirty tennis shoes then classy strapped sandals, hard bed, only 1 US plug in the room, crowds, cheesy entertainment, rooms often not cleaned until 6pm and kids everywhere.) But hey, its a budget family resort and truly a great value for the money.

The flight there and back was miserable. The planes were fine (5 hours total) but from Jasper our best flights were through Miami, with an 7 hour departing, and 9 hour returning layover. But that got us a $550 flight instead of a $1200 flight. Talking to others, there are better flights from different places, including a direct flight from New Jersey (4.5 hours).

On arrival, customs and transit were flawless. 10 minutes to get through customs and we found the Breezes representative waiting for us with our names. 10 minutes later we were on the air conditioned bus and 20 minutes later at the resort.
Check in took about 10 minutes (although I heard later some people at peek times took over an hour). The drive from airport to hotel was interesting. Of first note was the "shanty" part of town near the airport. A step up from Jamaica or Dominican Republic, clean, but definitely poor. But by the time we went through the city (which was immaculate and modern) and then to the hotel, things picked up. Clean modern homes, reasonably kept roads. A lot of new construction all fairly modern.

Diving was both excellent and unimpressive. Depending on what you expected. The dives were very easy, which I enjoyed. The boat picked us up at the resort dive shop (about a 2 minute walk from the room), sometimes picked up a few from other local hotels (10 minutes max) then at most a 10 minute ride to the dive site. Except for the first day at the tail end of a storm, the sea was calm with absolutely no currents. Clarity was fair (40' - 60') and improved with depth. A huge amount of wildlife, but mostly small fish, few large critters. That was the unimpressive part. If you were expecting sharks, rays, 10 foot barracudas, lobsters, giant crabs, well, you'd be disappointed. But if you liked millions of small colorful fish, amazing variety of coral and plant life, warm water (78deg/C +) and a long pleasant easy dive it was heaven. We did see some interesting ones, a few Huge Morey eels (1 foot across, 8+ ft long !) a turtle, a few big trumpet fish, but for the most part fish in the 1 inch to 2 foot length and a lot of "empty apartments" (coral nooks and crannies totally empty of fish). 2 lobster but small and hidden, and one turtle.

We dived 5 days (2 tanks/day) in the mornings, back by 12:30 for lunch drinks, and naps. We did a group checkout dive on sunday, then later in the week did a solo (just us 2) dive from the shore (unlimited free shore dives).
I used Nitrox/32 (no thats not Nitrous) for all the boat dives. I'd been Nitrox certified last year and this was my first try with the magic go-juice. I'm sold. I felt better after each dive then I started. I came up feeling wide awake, relaxed, clear headed and just fantastic. But then maybe I would have anyway, who knows. Great relaxing diving - 12 dives total. Could have done more but boy are those afternoon naps after a few beers are great.

The weather was great. about 75/C at night and up to 88/C in the day. The constant breezes kept the air cool and humidity was reasonable ! Our scuba gear actually mostly dried outside overnight (unlike Cozumel where they would get *wetter* if left outside), and I didn't sweat through my tee-shirts and create a sopping mess in an hour (again un-like Cozumel).

On Saturday we took the free shuttle to town. Wonderful and totally surprising. This was Willemstad, (previously called "New Amsterdam"). A beautiful town with a definite dutch look. Very pretty buildings and architecture. Clean, and a marvelous mix of cultures. All the people speak at least 4 languages (Papiamentu, English, Spanish, Dutch). The town was a mixture of tropical/island and modern. Little fishing boats docked selling fresh fish and fruit, along with chain stores, a McDonnalds, some dutch pubs, jewlery stores, trinket stores. Hard to describe. Very friendly and safe feeling, clean and reasonably modern with an old-world flair. Most of the tourists seemed to be European (probably dutch), with maybe 20% american and a mix of south american (its near Venezuela).

So why do I call this "The Hidden Jewel of the Caribbean" ... because it seems noone knows it exists yet is the nicest most beautiful island or tropical area I've been to that is both modern and native. I have suspicians that like the old Greenland/vs/Iceland trick long ago, the Dutch are not advertising Curaçao much and instead send foreigners to Aruba and keep Curaçao to themselves as their hidden jewel.

I'd definitely go back and recommend it as a good value for a vacation for singles, couples, or families. Plenty to do and see, wonderful weather, and just plain pleasant.

Posted by Unknown at 8:57 AM No comments: